Posted on December 13, 2012 by Deadline Artists

Thanks to Fred Siegel at Capital for this great review: 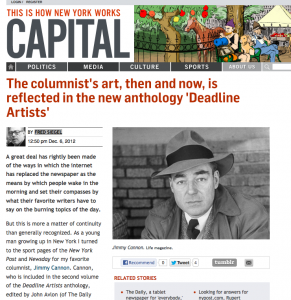 “A great deal has rightly been made of the ways in which the internet has replaced the newspaper as the means by which people wake in the morning and set their compasses by what their favorite writers have to say on the burning topics of the day.But this is more a matter of continuity than generally recognized. As a young man growing up in New York I turned to the sport pages of the New York Post and Newsday for my favorite columnist, Jimmy Cannon. Cannon, who is included in the second volume of the Deadline Artists anthology, edited by John Avlon (of The Daily Beast), Jesse Angelo (who was at The Daily) and NY1 TV-news anchor Errol Louis, would sometimes begin his columns with “Nobody asked me, but…” granting himself literary license to tackle a thorny topic.  Read more…”

This entry was posted in Events. Bookmark the permalink.