Posted on November 29, 2012 by Deadline Artists 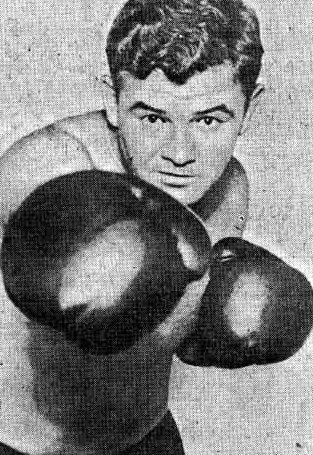 The fistic fairy tale comes true.  James J. Braddock, of New Jersey, “the Cinderella Man” of pugilism, is the new heavy-weight champion of the world.

He beats the glamorous Max Baer of California, in a fifteen-round right in the Madison Square Garden Bowl tonight, where no champion has yet successfully defended his title.

The decision of the referee, Johnny McAvoy, and the judges, Charley Lynch and George Kelly, is unanimous, which is the verdict of practically all the 25,000 spectators, who pay upwards of $200,000 to the see the battle.

It is the greatest pugilistic upset in the modern history of the boxing game.

Brought back from Hasbeenville by the magic wave of the wand of sheer chance, after being such a down-and-outer that he had to go on relief in his home State of New Jersey at $24 per month to provide food for his wife and three children, James J. Braddock at 29 years of age suddenly finds himself occupying the pinnacle of the pugilistic heap, with an utterly new life before him.

Coming into the ring on the short end of the unheard-of price of 8 to 1 with even money he does not come out for the tenth round, and with his chances so little regarded that the crowd does not half fill the “graveyard of champions,” Braddock fights from the opening bell with the desperation of a man leading a forlorn hope.

He is the slow, patient, plodding type, no longer the puncher he was in his fistic youth, but he is game, and he marches boldly into what the crowd feels is a fistic furnace only to suddenly discover that the fire is all out in the mighty Max Baer.

The latter claims two badly injured hands.  He says his fighting tools went back on him early in the battle, and his efforts become so feeble that some of the suspicious souls you always find among the pugilistic following are raising their eyebrows at the finish.

He has absolutely nothing of the form he displayed in his fights against Max Schmeling and Primo Carnera to stave off the already plodding of the man from New Jersey, “the Cinderella Man,” who stepped into this picture as a last hope choice of Madison Square Garden to get one final fight out of its contract with Max Baer.

Practically every boxing observer in the country except this writer picked Baer to win by a swift knockout, but we told you that the stage was set for one of the little comedy dramas that fistic fate loves to play against these odds-on choices, that Braddock is an earnest, tough fellow, never knocked out in the ring except what they call “technically,” and difficulty to knock out.

The “experts” sit stunned tonight as the battle progresses.  They observe Baer’s futile efforts and realize that only a miracle can save Baer.  The writer thinks Braddock wins a good majority of the rounds with ease.  He gets several from the referee because Baer is guilty of backhanding and hitting low, though these blows are unintentional.

Only occasionally is Baer of the magnificent torso, Baer of the many love affairs, and the wise cracks, the comedian tonight as he tries to catch up with the plugging, steady family man from New Jersey, whose aged father sits in the bowl with several other sons, watching the battle.  It is a very slow fight at all stages, there is not a knockdown, not a thrill, except in the result, which is bound to thrill anyone who likes to see the unexpected, who likes to see the underdog triumph once in a while.

As the decision is announced, Braddock stands in the ring swathed in a blue robe.  He is surrounded by his wildly excited handlers, a smile curing his bruised lips, and hundreds of his fellow citizens from New Jersey swarm up to the ringside to shake his hand.  Baer’s brother, the huge Buddy, climbed into the ring and kisses Max, who tries to smile, too, but it is a wry effort.  Max realizes from around the tenth round that his title is gone, and he keeps charging and pummeling Braddock around the body with his sore hands but by this time Jim is cool and confident and outboxes Baer.  The latter is frequently warned by Johnny McAvoy, the referee, for roughing and other foul tactics.

Max quickly leaves the ring, and the crowd, which is booing and clapping derisively at him through half the fight, gives him a few parting boos.

For this fight tonight Baer gets 42 ½ per cent of the receipts against Braddock’s 15 per cent.  Baer has made little money out of the title in the brief year he has held it since he beat Primo Carnera in this very arena.

Braddock has to fairly fight his way through the crowd to get to his dressing room.  The crowd is so big he slips away without even taking his usual shower bath.

His victory tonight saves Madison Square Garden’s fistic hash to some extent, because Baer was through with the Garden with this fight and Braddock had to sign a contract to give his next fight for the title to the Garden, though he is already under contract to the new Twentieth Century Sporting Club.

When the chance came for Braddock to get the fight with Baer for the title, Mike Jacobs, head of the Twentieth Century, released Jim to the Garden, saying:

“I will not stand in the way of a man who has the opportunity of fighting for the championship.”

Baer, in his dressing room, says he will never fight again and is going to devote his future to raising white-faced cattle in California, but even while he is saying this, his manager, Ansil Hoffman, is signing with Mike Jacobs to fight the winner of the Joe Louis-Carnera battle in the Fall.

It is doubtful if Braddock will fight again this year, but will devote his time to make a few of the dollars that have been eluding him since he lost his considerable savings in the general crash of ’29, had to go back to hard labor and wound up on relief.

A year ago, in this very ring, he stepped in to pick up a small purse that he needed badly by fighting a youngster named Corn Griffin in a preliminary.  He was supposed to be a sacrifice to the career of a rising youngster.  He was knocked over in the first round, one of the two times Jim has ever been knocked down, and his old-time admirers sighed sadly, recalling his former fistic glory.  Braddock got up, made a desperate rally, and flattened Griffin.

Finds He’s Not Through

That decided him that he was not through after all.  He fought John Henry Lewis, a Negro from the Pacific Coast, and won a close decision.  Then he beat Art Lasky in fifteen rounds.  His first act after getting his start was to repay the money he had taken from the relief authorities, so it is said.

The Garden wanted to match Baer with Max Schmeling for the title after Schmeling knocked out Steve Hamas, but Schmeling refused to come here from Germany before September.  Meantime, Mike Jacobs had signed up Carnera, the other outstanding contender, and the Garden fell back on Braddock in sheer desperation.  It devoted tremendous ballyhoo effort trying to build up the man from New Jersey as a contender, but the pugilistic following eyed the effort with little interest, as the crowd tonight indicates.

Those who remain away miss nothing, except the amazing spectacle of the transfer of the heavyweight crown from the curly locks of Glamorous Baer to the brown thatched head of Braddock, whose once quite regular features are now somewhat disarranged by his experiences in the ring since he began fighting in 1926, and who has a well cauliflowered ear.

Braddock, an inarticulate fellow, who does not know how to bluster and play-act like Baer, but whose manager, Joe Gould, is voluble enough for a Huey Long filibuster, has said all along that he thought he would beat Baer, and there is no fear in his heart tonight as he faces the magnificent champion from California, the ex-butcher boy, whose antics have made him one of the most colorful characters the ring has ever known.

At the start of the fight, Baer apparently begins half playing with Braddock.  Perhaps he has been fooled by the predictions of the experts.  The crowd boos him as a showoff, and Baer only grins.  For a couple of rounds he keeps up his dilatory tactics, but all the time Braddock is taking the thing seriously and is picking up points by out-boxing Max with a long left and an occasional right-hand chop.

Then, urged by Ancil Hoffman and Dolph Thomas, his handlers, Max starts trying to do a little fighting, only to discover that he cannot reach Braddock with any effectiveness.  He claims that it is in the fifth round that his right hand goes.  In any event, the fighting gets slower and slower as the rounds pass, and at the finish the experts are agreeing that it is one of the slowest fights in heavyweight history.

They Wait and Wait

Perhaps some of them are piqued by their predictions going astray.  Baer’s admirers keep waiting and waiting for the tiger-like attack that felled the German, Schmeling, and the Italian giant, Carnera, but finally even his best friends can see that Maxie cannot fight tonight, and join the steadily growing Braddock brigade, that starts out with just a few loyal pals from New Jersey.  It is an entire army at the close of the battle.

Once Max stops the booing against him by putting on a grotesque and very funny pantomime of a groggy fighter, and raising a big laugh, but when the laugh comes Baer is too far behind to ever catch up, and there is something almost pathetic in his attempt at comedy.

Meantime, Braddock’s corner, where Joe Gould, his manager, and Whitney Bimstein and Ray Arcel and Doc Robb are clustered behind the ring posts, like a group of frightened men drawn together for mutual protection, is a bedlam as they see Braddock steadily rolling up rounds on the baffled Baer.

They are yelling at McAvoy, the referee, and at Baer, who finally stops fighting, completely exasperated, and stands with his hands down, glaring at the corner, and leaving himself open for a knockout punch from a quicker thinker than Braddock.

Once, in his excitement at what he deems Max’s foul treatment of Jim, Joe Gould rushes across the ring, shouting at Baer, but, fortunately, it is between rounds.  A second entering a ring during the actual fighting calls for a disqualification of his fighter.

Joe is recalled by the yells of Jimmy Johnston, the Garden boxing director, who is almost beside himself with joy over Braddock’s victory, because he hates Max Baer with a deep hatred.  Incidentally, Johnston’s interest in Braddock’s success is heightened by the Garden’s contract with the fighter.

At the close of the fight, while the fighters are awaiting the announcement of the decision, the crowd begins filing out, knowing beforehand what the verdict will be, and so ends the fistic fairy tale, as all fairy tales should end, with the poor abused hero finding his pumpkins of failure turned into prancing white steeds of glittering success and his feet incased in the glass slippers of happiness, if you can follow all this twisted metaphor.

Anyway, so ends the strange story of James J. Braddock “the Cinderella Man” of Fistiana.

And you cannot match his story anywhere in the realm of the most fantastic fiction.