Posted on September 16, 2011 by Deadline Artists 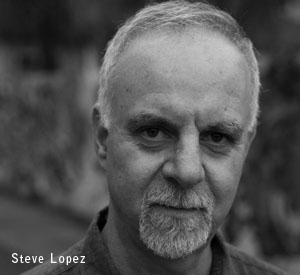 He’s a lucky man, Nathaniel Anthony Ayers. At least in some ways. Despite the imagined voices and daily flutter of scattered thoughts, he has a burning passion.

For him, the city is an orchestra, a labyrinth of musical references and inspiration. He sees a swaying palm and hears a violin. A bus roars by and gives him a bass line. He hears footsteps and imagines Bach and Brahms.

“I can’t survive,” Nathaniel once told me, “if I can’t hear Los Angeles the way I like to hear it.”

That’s why he doesn’t want to give up sleeping on the streets. I’ve told him that if he’d be willing to move into an apartment, he would have the freedom to devote even more time to music. As it is, he lugs his belongings around in a shopping cart, tugging an anchor through the city. If he locked up his things, he could travel lighter, with just his fiddle or cello.

But Nathaniel can’t see the advantages. After years on the streets, his schizophrenia untreated, he’s at home outdoors in a world of his own making.

He needed a nudge.

The staffers at Lamp, the skid row agency that has been working with Nathaniel most of the year, helped me devise a plan in late October. A downtown apartment, complete with all the supportive services Nathaniel needs, had become available. At the same time, a member of the Los Angeles Philharmonic had graciously offered to give Nathaniel cello lessons. Now if we could just get Nathaniel to see that the apartment would be the perfect location. tunnel.

Thanks, Nathaniel said, but he’d rather have the lessons in the 2nd Street
With all due respect, I told him, a member of a world-class orchestra might balk at the idea, even if Nathaniel had studied at Juilliard. In the end, he gave in.

As a warmup, I went to the apartment with Nathaniel, trying to get him comfortable there. The building is on a quiet street that seems miles from skid row, with a courtyard where bougainvillea flows over an arbor.

Nathaniel sat on a bench in the garden, took bow in hand and played Beethoven, followed by Bach. Several residents stopped to listen on their way through the courtyard, stunned, as people often are, at the bedraggled source of such refinement.

Let’s go check out the room, I said when he broke. Maybe the acoustics are good.
The apartment was small, plain, perfect. Nathaniel liked the light that fell through the window, filtered by an oleander that scratched lightly at the screen.

He took a seat on the bed and played Schubert, and in the embrace of the music, eyes closed, he was home.

Nathaniel was nervous about the encounter, worried he wasn’t good enough to burn the time of a professional. So too was Peter Snyder. The cellist, a 33-year member of the Los Angeles Philharmonic, couldn’t know what he was in for.

“It so moved me that I simply have to do something,” he had written to me after meeting Nathaniel at Disney Hall. The orchestra had invited Nathaniel to a rehearsal, and Snyder had felt a connection with him during a brief chat.

One Monday last month, I picked up Snyder at Disney and we drove down off the hill, through downtown and across to skid row, a six-minute trip across the universe. Nathaniel was waiting in the courtyard with his shopping cart, two violins and a cello. We moved into the apartment and I asked Nathaniel when he last had a lesson.

Early 1970s, he said. Right before a concert in Aspen.

“Did you play in Aspen?” Snyder asked.

“Yes, but I got in trouble with the psychiatrists there,” Nathaniel said without explanation. “Straitjacket.”

He mentioned the names of several teachers and mentors; Snyder knew them all.

“I brought you something,” Snyder said, showing Nathaniel the sheet music to Pablo Casals’ “Song of the Birds.” “It’s something appropriate, because you’re kind of a wandering bird.”

Nathaniel responded by telling Snyder there was a battle in the tunnels between Don Quixote and Colonel Sanders.

Without an invitation, Nathaniel began playing, and Snyder was instantly impressed.
“You know,” he said when Nathaniel paused, “you’re a very natural player.”

For several minutes they talked music, a conversation that was way over my head. Snyder would later write to me: “The way in which he compared the philosophies of different composers and their visions is extraordinary.”

Snyder took his own cello and began to play.

Next it was Nathaniel’s turn to impress. Snyder asked if he could play Bach, and Nathaniel showed his chops.

“I’m amazed,” Snyder said. “I know many talented people who don’t have as pretty a sound.”

As Nathaniel continued, Snyder leaned in to me.

“He might be a musical genius,” he said. “It’s not unusual to find someone with his aptitude. What is unbelievable is to see someone without recent training play so well.”

Snyder told Nathaniel he ought to seriously consider keeping the apartment as a
sanctuary — a safe place to connect spiritually with his music.

Thanks, Nathaniel responded quickly, but he preferred playing on the streets and in the tunnel.

“How about making this deal,” Snyder said. “You come here as often as you can, so maybe we can have another lesson.”

Nathaniel fidgeted like a teenager, then repeated his preference for the tunnel. “Think of this as a clean, quiet tunnel,” Snyder suggested.

Nathaniel was sitting by the window and his own shadow fell before him. The idea seemed to grow on him.

“I wouldn’t have thought of it,” he said. “Yeah. This is a brand new tunnel.”

Nathaniel stayed away from the apartment for days after the lesson, then surprised everyone by asking to leave his cart there for several hours while he copied sheet music at the public library. But that was it. He didn’t go back, and he said he had no interest in the apartment for anything but lessons from Peter Snyder.

“Will you give me violin lessons?” I asked Nathaniel the day after Thanksgiving.
Sure, he said.

He’s a smart man — cagey, even — and good at sniffing out a ruse. I think Nathaniel was on to me, but he agreed.

I didn’t envy the poor man. I took guitar lessons for several years, but didn’t even know how to hold a violin. We sat in the courtyard last Wednesday and Nathaniel was patient and gentle, making me think teaching could one day give him new meaning and pay his bills. He had selected a simple piece of music for me to try but quickly gave up on it and asked me to just try and get something — anything — out of the violin.

What I got sounded like the torture of several small animals.

“There,” Nathaniel said. “You get a sound and work with it. It’s frustrating, but if you admire the violin, you’ll weather the frustrations. Desire, discipline, diversity.”

Nathaniel had a white shirt tied over his head. In one pocket of his blue cardigan was a tennis ball, in the other a dinner roll. He took out a copy of Beethoven’s Ninth and began playing effortlessly.

By the time he switched to cello, he had drawn a crowd. One resident approached with a battery-operated drill and gunned it in rhythm with the music. Two other residents stopped and said they were musicians.

I suggested they start a band.

Nathaniel liked the idea, and he also liked it when another resident, wowed by his moves on cello, handed him a dollar.

When everyone was gone but the two of us, I steered the conversation to Nathaniel’s mother, who died several years ago.

You know, I said, she’d probably like to know you have a safe place to lay your head at night.

“I lost a god and I gained a god,” he told me. His mother died in Cleveland, but he came to Los Angeles and found a statue of Beethoven in Pershing Square.

As I struggled with the violin, a man named James walked up, stood next to the “Smoking Prohibited” sign and lit a cigarette.

“I do too live here,” Nathaniel snapped. “I have a place.”

It was music to my ears. On some level, maybe Nathaniel had already begun thinking of the apartment as home, even if he hadn’t spent a night in it.

“You’re in violation of the city ordinance against smoking in that spot,” Nathaniel persisted.!

“You see?” Nathaniel said, standing next to his cart. “I knew it was personal.”
“You need soap and water,” James said.

“You’re killing yourself and everyone else,” Nathaniel retorted.
“Get a doctor,” James said. “Get some help.”

If Nathaniel was hurt by that, it didn’t show. I wondered how many times in 30- plus years he’s been insulted that way.

“You know what?” James asked. “It’s a shame you allowed yourself to give up.” “I didn’t give up,” Nathaniel said.

“You’re a young man, strong, you could get a job. You’re a musician and you should encourage someone else. You can’t encourage no one looking like that…. Look at all that talent gone to waste.”

Nathaniel shrugged as he got his cart ready to leave.

“You gave up,” James went on, reciting what sounded like a speech he’d heard a few times.

Nathaniel was ready to go. He told James he hadn’t quit anything. Then he thanked him for trying to help, and pointed once more to the room he hasn’t yet slept in.

“That is my place,” he said. Maybe one day it will be.