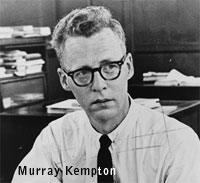 MOSE Wright, making a formation no white man in his county really believed he would dare to make, stood on his tiptoes to the full limit of his sixty-four years and his five feet three inches yesterday, pointed his black, workworn finger straight at the huge and stormy head of J. W. Milam and swore that this was the man who dragged fourteen-year- old Emmett Louis Till out of his cottonfield cabin the night the boy was murdered.

“There he is,” said Mose Wright. He was a black pigmy standing up to a white ox. J. W. Milam leaned forward, crooking a cigaret in a hand that seemed as large as Mose Wright’s whole chest, and his eyes were coals of hatred.

Mose Wright took all their blast straight in his face, and then, for good measure, turned and pointed that still unshaking finger at Roy Bryant, the man he says joined Milam on the night-ride to seize young Till for the crime of whistling suggestively at Bryant’s wife in a store three miles away and three nights before.

“And there’s Mr. Bryant,” said Mose Wright and sat down hard against the chair- back with a lurch which told better than anything else the cost in strength to him of the thing he had done. He was a field Negro who had dared try to send two white men to the gas chamber for murdering a Negro.

He sat in a court where District Attorney Gerald Chatham, who is on his side, steadily addressed him as Uncle Mose and conversed with him in a kind of pidgin cotton- picker’s dialect, saying “axed” for “asked” as Mose Wright did and talking about the “undertaker man.”

Once Chatham called him “Old Man Mose,” but this was the kindly, contemptuous tolerance of the genteel; after twenty-one minutes of this, Mose Wright was turned over to Defense Counsel Sidney Canton and now the manner was that of an overseer with a field hand.

Sidney Carlton roared at Mose Wright as though he were the defendant, and every time Carlton raised his voice like the lash of a whip, J. W. Milam would permit himself a cold smile.

And then Mose Wright did the bravest thing a Delta Negro can do; he stopped saying “sir.” Every time Carlton came back to the attack, Mose Wright pushed himself back against his chair and said “That’s right” and the absence of the “sir” was almost like a spit in the eye.
When he had come to the end of the hardest half hour in the hardest life possible for a human being in these United States, Mose Wright’s story was shaken; yet he still clutched its foundations. Against Carlton’s voice and Milam’s eyes and the incredulity of an all-white jury, he sat alone and refused to bow.

If it had not been for him, we would not have had this trial. It will be a miracle if he wins his case; yet it is a kind of miracle that, all on account of Mose Wright, the State of Mississippi is earnestly striving here in this courtroom to convict two white men for murdering a Negro boy so obscure that they do not appear to have even known his name.
He testified yesterday that, as Milam left his house with Emmett Till on the night of August 28, he asked Mose Wright whether he knew anyone in the raiding party. “No, sir, I said I don’t know nobody.”

Then Milam asked him how old he was, and Mose Wright said sixty-four and Milam said, “If you knew any of us, you won’t live to be sixty-five.”

And, after the darkened car drove off, with his great-nephew, Mose Wright drove his hysterical wife over to Sumner and put her on the train to Chicago, from which she has written him every day since to cut and run and get out of town. The next day, all by himself, Mose Wright drove into nearby Greenwood and told his story in the sheriff’s office.

It was a pathetic errand; it seems a sort of marvel that anything was done at all. Sheriff George Smith drove out to Money around 2 P.M. that afternoon and found Roy Bryant sleeping behind his store. They were good friends and they talked as friends about this little boy whose name Smith himself had not bothered to find out.

Smith reported that Roy had said that he had gone down the road and taken the little boy out of “Preacher’s” cabin, and brought him back to the store and, when his wife said it wasn’t the right boy, told him to go home.

Sheriff Smith didn’t even take Bryant’s statement down. When he testified to it yesterday, the defense interposed the straight-faced objection that this was after all the conversation of two friends and that the state shouldn’t embarrass the sheriff by making him repeat it in court. Yet, just the same, Sheriff Smith arrested Roy Bryant for kidnaping that night.

When the body supposed to be Emmett Till’s was found in the river, a deputy sheriff drove Mose Wright up to identify it. There was no inquest. Night before last, the prosecution fished up a picture of the body which had been in the Greenwood police files since the night it was brought in, but there was no sign the sheriff knew anything about it, and its discovery was announced as a coup for the state. But, with that apathy and incompetence, Mose Wright almost alone has brought the kidnapers of his nephew to trial.

The country in which he toiled and which he is now resigned to leaving will never be the same for what he has done. Today the state will put on the stand three other field Negroes to tell how they saw Milam and Bryant near the murder scene. They came in scared; one disappeared while the sheriff’s deputies were looking for him. They, like Mose Wright, are reluctant heroes; unlike him, they have to be dragged to the test.

They will be belted and flayed as he was yesterday, but they will walk out with the memory of having been human beings for just a little while. Whatever the result, there is a kind of majesty in the spectacle of the State of Mississippi honestly trying to convict two white men on the word of four Negroes.

And we owe that sight to Mose Wright, who was condemned to bow all his life, and had enough left to raise his head and look the enemy in those terrible eyes when he was sixty-four.