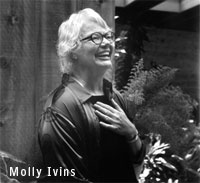 SHE had known, ever since she first read about the Vietnam Veterans Memorial, that she would go there someday. Sometime she would be in Washington and would go and see his name and leave again.

So silly, all that fuss about the memorial. Whatever else Vietnam was, it was not the kind of war that calls for some “Raising the Flag at Iwo Jima” kind of statue. She was not prepared, though, for the impact of the memorial. To walk down into it in the pale winter sunshine was like the war itself, like going into a dark valley and damned if there was ever any light at the end of the tunnel. Just death. When you get closer to the two walls, the number of names start to stun you. It is terrible there in the peace and the pale sunshine.
The names are listed by date of death. There has never been a time, day or night, drunk or sober, for 13 years she could not have told you the date. He was killed on Aug, 13, 1969. It is near the middle of the left wall. She went toward it as though she had known beforehand where it would be. His name is near the bottom. She had to kneel to find it. Stupid clichés. His name leaped out at her. It was like being hit.

She stared at it and then reached out and gently ran her fingers over the letters in the cold black marble. The memory of him came back so strong, almost as if he were there on the other side of the stone, she could see his hand reaching out to touch her fingers. It had not hurt for years and suddenly, just for a moment, it hurt again so horribly that it twisted her face and made her gasp and left her with tears running down her face. Then it stopped hurting but she could not stop the tears. Could not stop them running and running down her face.

There had been a time, although she had been an otherwise sensible young woman, when she had believed she would never recover from the pain. She did, of course. But she is still determined never to sentimentalize him. He would have hated that. She had thought it was like an amputation, the severing of his life from hers, that you could live on afterwards but it would be like having only one leg and one arm. But it was only a wound. It healed. If there is a scar it is only faintly visible now at odd intervals.

He was a biologist, a t.a. at the university getting his Ph.D. They lived together for two years. He left the university to finish his thesis and before he could line up a public school job – teachers were safe in those years – the draft board got him. They had friends who had left the country, they had friends who had gone to prison, they had friends who had gone to Nam. There were no good choices in those years. She thinks now he unconsciously wanted to go even though he often said, said in one of his last letters, that it was a stupid f—in’ war. He felt some form of guilt about a friend of theirs who was killed during the Tet offensive. Hubert Humphrey called Tet a great victory. His compromise was to refuse officer’s training school and go as an enlisted man. She had thought then it was a dumb gesture and they had a half-hearted quarrel about it.

He had been in Nam less than two months when he was killed, without heroics during a firefight at night, by a single bullet in the brain. No one saw it happen. There are some amazing statistics about money and tonnage from that war. Did you know that there were more tons of bombs dropped on Hanoi during the Christmas bombing of 1971 than in all of World War II? Did you know that the war in Vietnam cost the United States $123.3 billion? She has always wanted to know how much that one bullet cost. Sixty-three cents? $1.20? Someone must know.

The other bad part was the brain. Even at this late date, it seems to her that was quite a remarkable mind. Long before she read C.P. Snow, the ferociously honest young man who wanted to be a great biologist taught her a great deal about the difference between the way scientists think and the way humanists think. Only once has she been glad he was not with her. It was at one of those bizarre hearings about teaching “creation
science.” He would have gotten furious and been horribly rude. He had no patience with people who did not understand and respect the process of science.

She used to attribute his fierce honesty to the fact that he was Yankee. She is still prone to tell “white” lies to make people feel better, to smooth things over, to prevent hard feelings. Surely there have been dumber things for lovers to quarrel over than the social utility of hypocrisy. But not many.

She stood up again, still staring at his name, stood for a long time. She said, “There it is,” and turned to go. A man to her left was staring at her. She glared at him resentfully. The man had done nothing but make the mistake of seeing her weeping. She said, as though daring him to disagree, “It was a stupid, f—in’ war,” and stalked past him.

She turned again at the top of the slope to make sure where his name is, so whenever she sees a picture of the memorial she can put her finger where his name is. He never said goodbye, literally. Whenever he left he would say, “Take care, love.” He could say it many different ways. He said it when he left for Vietnam. She stood at the top of the slope and found her hand half-raised in some silly gesture of farewell. She brought it down again. She considered thinking to him, “Hey, take care, love,” but it seemed remarkably inappropriate. She walked away and was quite entertaining for the rest of the day, because it was expected of her.

She thinks he would have liked the memorial O.K. He would have hated the editorials. He did not sacrifice his life for his country or for a just or noble cause. There just were no good choices in those years and he got killed.