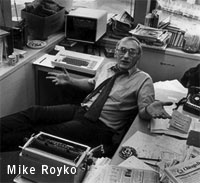 If a man ever reflected a city, it was Richard J. Daley of Chicago.

In some ways, he was this town at its best—strong, hard-driving, working feverishly, pushing, building, driven by ambitions so big they seemed Texas-boastful.
In other ways, he was this city at its worst—arrogant, crude, conniving, ruthless, suspicious, intolerant.

He wasn’t graceful, suave, witty, or smooth. But, then, this is not Paris or San Francisco.
He was raucous, sentimental, hot-tempered, practical, simply, devious, big, and powerful. This is, after all, Chicago.

Sometimes the very same Daley performance would be seen as both outrageous and heroic. It depended on whom you asked for an opinion.

For example, when he stood on the Democratic National Convention floor in 1968 and mouthed furious crudities at smooth Abe Ribicoff, tens of millions of TV viewers were shocked.

But it didn’t offend most Chicagoans. That’s part of the Chicago style—belly to belly, scowl to scowl, and may the toughest or loudest man win.

Daley was not an articulate man, most English teachers would agree. People from other parts of the country sometimes marveled that a politician who fractured the language so thoroughly could be taken so seriously.

Well, Chicago is not an articulate town, Saul Bellow notwithstanding. Maybe it’s because so many of us aren’t that far removed from parents and grandparents who knew only bits and pieces of the language.

So when Daley slid sideways into a sentence, or didn’t exit from the same paragraph he entered, it amused us. But it didn’t sound that different from the way most of us talk.
Besides, he got his point across, one way or another, and usually in Chicago style. When he thought critics should mind their own business about the way he handed out insurance business to his sons, he tried to think of a way to say that they should kiss his bottom. He found a way. He said it. We understood it. What more can one ask of the language.

Daley was a product of the neighborhoods and he reflected it in many good ways— loyalty to the family, neighbors, old buddies, the corner grocer. You do something for someone, they do something for you. If somebody is sick, you offer the family help. If someone dies, you go to the wake and try to lend comfort. The young don’t lip off to the old, and everybody cuts his grass, and takes care of his property. And don’t play your TV too loud.
That’s the way he liked to live, and that’s what he thought most people wanted, and he was right.

But there are other sides to Chicago neighborhoods—suspicious of outsiders, intolerance toward the unconventional, bigotry and bullying.

That was Daley, too. As he proved over and over again, he didn’t trust outsiders, whether they were long-hairs against war, black preachers against segregation, reformers against the Machine, or community groups against his policies. This was his neighborhood-ward- city-county, and nobody could come in and make noise. He’d call the cops. Which he did.
There are those who believed Daley could have risen beyond politics to statesmanship had he embraced the idealistic causes of the 1960s rather than obstructing them. Had he used his unique power to lead us toward brotherhood and understanding, they say, he could have achieved greatness.

Sure he would have. But he expected that response from Daley was as realistic as asking Cragin, Bridgeport, Marquette Park, or any other white Chicago neighborhood to celebrate Brotherhood Week by having black gang leader Jeff Fort to dinner. If Daley was reactionary and stubborn, he was in perfect harmony with his town.

Daley was a pious man—faithful to his church, a believer in the Fourth of July, apple pie, motherhood, baseball, the Boy Scouts, the flag, and sitting down to dinner with the family, and deeply offended by public displays of immorality.

On the other hand, there were financial vices.

And if somebody in City Hall saw a chance to make a fast bundle or two, Daley wasn’t given to preaching. His advice amounted to: Don’t get caught.

But that’s Chicago, too. The question has never been how you made it, but if you made it. The town was built by great men who demanded the drunkards and harlots be arrested, while charging them rent until the cops arrived.

If Daley sometimes abused his power, it didn’t offend most Chicagoans. The people who came here in Daley’s lifetime were accustomed to someone wielding power like a club, be it a czar, emperor, king, or rural sheriff. The niceties of the democratic process weren’t part of the immigrant experience. So if the machine muscle offended some, it seemed like old times to many more.

Eventually Daley made the remarkable transition from political boss to father figure.
Maybe he couldn’t have been a father figure in Berkeley, California; Princeton, New Jersey; or even Skokie, Illinois. But in Chicago there was nothing unusual about a father
who worked long hours, meant shut up when he said shut up, and backed it up with a jolt to the head. Daley was as believable a father figure as anyone’s old man.

Now he’s gone and people are writing that the era of Richard J. Daley is over. Just like that.

But it’s not. Daley has left a legacy that is pure Chicago.

I’m not talking about his obvious legacy of expressways, high-rises, and other public works projects that size-conscious Chicagoans enjoy.

Daley, like this town, relished a political brawl. When arms were waving and tempers boiling and voices cracking, he’d sit in the middle of it all and look as happy as a kid at a birthday party.

Well, he’s left behind the ingredients for the best political donnybrook we’ve had in fifty years.

They’ll be kicking and gouging, grabbing and tripping, elbowing and kneeing to grab all, or a thin sliver of the power he left behind.

It will be a classic Chicago debate. He knew it would turn out that way, and the thought probably delighted him.

I hope that wherever he is, he’ll have a good seat for the entire show. And when they are tangled in political half-Nelsons, toeholds, and headlocks, I wouldn’t be surprised if we hear a faint but familiar giggle drifting down from somewhere.