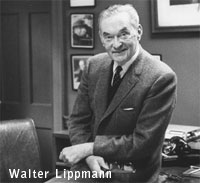 I cannot quite remember whether Miss Earhart undertook her flight with some practical purpose in mind, say, to demonstrate something or other about aviation which will make it a little easier for commercial passengers to move more quickly around the world. There are those who seem to think that an enterprise like hers must have some such justification, that without it there was no good reason for taking such grave risks.

But in truth Miss Earhart needs no such justification. The world is a better place to live in because it contains human beings who will give up ease and security and stake their own lives in order to do what they themselves think worth doing. They help to offset the much larger number who are ready to sacrifice the ease and the security and the very lives of
others in order to do what they want done. No end of synthetic heroes strut the stage, great bold men in bulletproof vests surrounded by squads of armed guards, demonstrating their courage by terrorizing the weak and the defenseless. It is somehow reassuring to think that there are also men and women who take the risks themselves, who pit themselves not against their fellow beings but against the immensity and the violence of the natural world, who are brave without cruelty to others and impassioned with an idea that dignifies all who contemplate it.

The best things of mankind are as useless as Amelia Earhart’s adventure. They are the things that are undertaken not for some definite, measurable result, but because someone, not counting the costs or calculating the consequences, is moved by curiosity, the love of excellence, a point of honor, the compulsion to invent or to make or to understand. In such persons mankind overcomes the inertia which would keep it earthbound forever in its habitual ways. They have in them the free and useless energy with which alone men surpass themselves.
Such energy cannot be planned and managed and made purposeful, or weighed by the standards of utility or judged by its social consequences. It is wild and it is free. But all the heroes, the saints and the seers, the explorers and the creators partake of it. They do not know what they discover. They do not know where their impulse is taking them. They can give no account in advance of where they are going or explain completely where they have been. They have been possessed for a time with an extraordinary passion which is unintelligible in ordinary terms.

No preconceived theory fits them. No material purpose actuates them. They do the useless, brave, noble, the divinely foolish and the very wisest things that are done by man. And what they prove to themselves and to others is that man is no mere creature of his habits, no mere automaton in his routine, no mere cog in the collective machine, but that in the dust of which he is made there is also fire, lighted now and then by great winds from the sky!